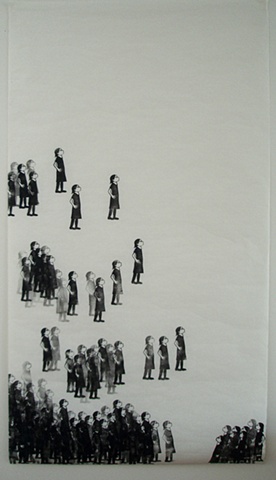 The Further Adventures of Girl is an ongoing, ever-expanding series of works that revolve around the character of Girl, a young golden-skinned, ethnically-ambiguous character who navigates a myriad of militaristic and post-apocalyptic landscapes. Girl is both singular and plural: she is a figure that exists in a world populated only by other Girls, seemingly identical in features and dress. Sometimes she is alone and isolated; other times she is multiplied into a perfectly uniform army, marching, saluting, and exercising in formation.

As a child who was schooled during Suharto’s Indonesia of the 1970s and 1980s, I regularly participated in marching exercises, group calisthenics, flag-raising ceremonies, and recitations of nationalistic poems and revolutionary songs. The militaristic culture that informed a large part of my upbringing was inundated with uniformity and sameness, where being different or individualistic was seen as a mark of deviance or a reflection of a lack of patriotism. Much of this experience is the lens through which I look at contemporary manifestations of militarism, and informs the situations and contexts that Girl finds herself in.

This series explores and investigates the ways that nationalism and violence are visually coded and depicted in popular media, and by extension, the gendered and racialized subtexts of these representations. My fascination for pop culture comes from concerns as to how, for better or worse, ideologies become normalized through their repetition, circulation, and regurgitation, often under the guise of entertainment or education. I have been particularly interested in the potential of illustrated narratives, and in the ways the fictionalized environments have the potential to unpack real-world situations, and question and critique the world that we physically inhabit. I use a visual vocabulary borrowed from children’s media – toys, books, objects, and other forms of productions aimed at children – which often depicts the adult world in a miniaturized, simplified, and sanitized form, representing it under a guise of play, innocence, and harmlessness.

My interest in this investigation is in understanding how it is that group identifications are formed, questioning notions of “otherness,” where seemingly clear lines can be drawn between “us” and “them.” In the work, these positions are left intentionally vague – Girl is at once perpetrator, victim, and mute observer – with the hopes of complicating our own sense of complicity and culpability with what happens in the world-at-large.