Your depiction of various kinds of animals brings to mind a history of exploitation by explorers and hunters for their exotic appeal or economic gain. Animals feature importantly in Javanese myths and legends. You have also created imaginary, even bizarre hybrid animals. How does their significance play out in your work?

When I began this work in 2011-2012, I was searching for ways to suggest narratives without depicting a human character (such as I had been doing with Girl), and to consider the kinds of narrative spaces that can exist beyond the earthly and the human. Along with batiks, I was looking at European wallpapers, painted and printed ceramic objects and tiles, historical prints, and illustrated books. I was also thinking about speculative fiction, the role of “alien” and non-human characters in stories, and how they are anthropomorphized. I thought about the way that some animals are exoticized, prized as game, or used as national emblems.

I began to re-read some of the legends that I grew up with. I found myself fascinated by tales and depictions of hybrid creatures – such as centaurs, dragon-fish, kinara – as well as by depictions of animals and landscapes that were clearly fashioned from hearsay and imagination (rather than from actual observation, evident in many European depictions of Asian environments). I started to focus on objects and images where one could see different cultural forces meet, merge, and re-emerge. Some of my drawings focused on pre-existing hybrid forms; others were part-human; and others were forced mash-ups of various animals (like Unfashioned Creature). These creatures that I was drawing became emblematic to me of spaces that are speculative, existing between worlds and across time.

I looked for imaginings of animals, how people might represent some of these animals that they’d never seen before, and how they might arrive at these representations. That is what initiated my exploration of Dürer’s rhinoceros – its history, its influence, and thinking of its story as emblematic of a particular period of colonial history. That then led me to the book Venationes (1578), which illustrates various forms of hunting games, including everything from hunting elephants to hunting unicorns and dragons; I spent a few days with the Venationes book in a library in Antwerp, during an artist residency at the Frans Masereel Print Centre near there. At the same time I was reading The Medici Giraffe by Marina Belozerskaya (2006), a series of essays on the history of human obsession with exotic animals.Studying these two books simultaneously led to the work in this exhibition that focuses on tusks and tusked animals, to considering the valuation of some animal parts more than others, and the violence that may be implicit in the impulse to collect the exotic. 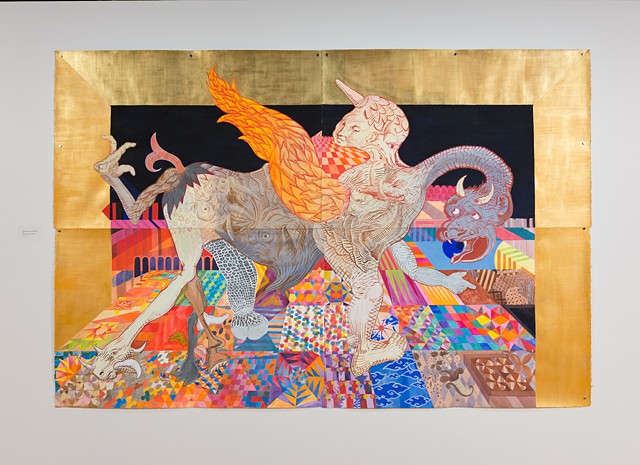 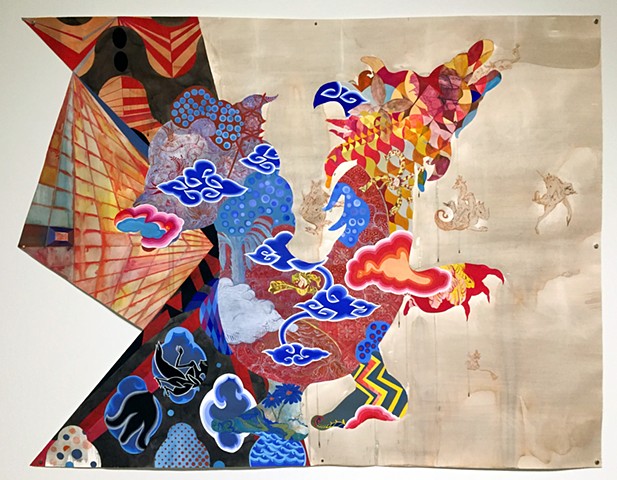 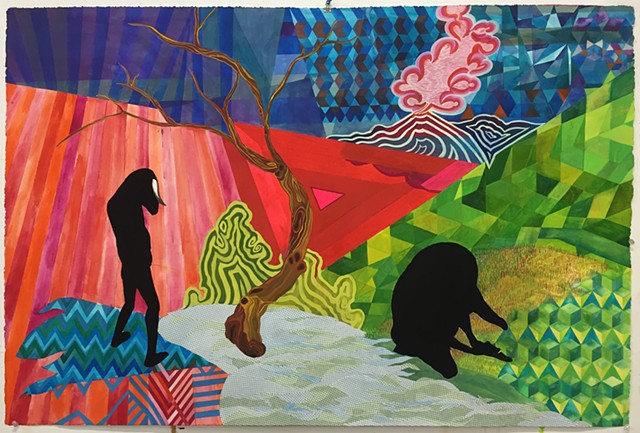 It Started as A Story About A Mountain (Part 1)
Ink, gouache, and silkscreen collage on paper
31" x 48" 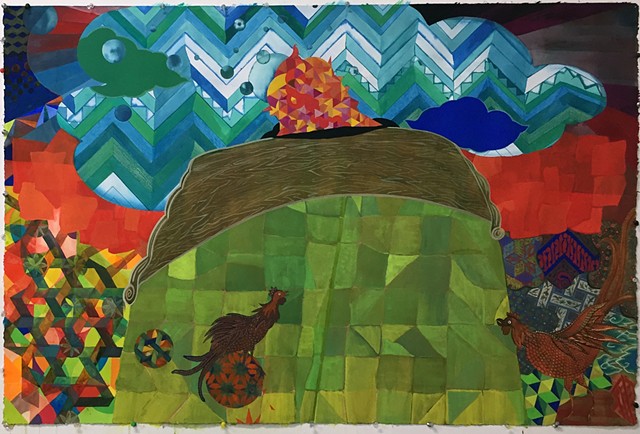 It Started As a Story About A Mountain (The End)
Ink, gouache, and silkscreen collage on paper
31" x 48"